size： A A A
On September 8, 2021, United Nations Association of China (UNA-China) and Chinese People’s Institute of Foreign Affairs (CPIFA) co-hosted the Seminar to Commemorate the 50th Anniversary of the Restoration of the Lawful Seat of the People’s Republic of China in the United Nations with the theme of “Join Hands for a Shared Future” in Beijing. Mr. WANG Yi, State Councilor and Foreign Minister of China delivered a keynote video speech entitled “Building on the Extraordinary Fifty Years and Working Together for a Shared Future”. Mr. WANG Chao, President of UNA-China and CPIFA presided over the seminar.

The keynote speakers include Former Prime Minister of Australia, President and CEO of Asia Society Mr. Kevin Rudd, Founder and Executive Chairman of the World Economic Forum Prof. Klaus Schwab, Ambassador of Algeria to China Amb. Ahcene Boukhelfa, Ambassador of Pakistan to China Amb. Moin ul Haque, Permanent Representative of the African Union to China Amb. Rahamtalla M. Osman, Distinguished Fellow at the Asia Research Institute of National University of Singapore and Former Permanent Representative of Singapore to the UN Mr. Kishore Mahbubani, Senior Fellow and Co-Founder of the Center for Strategic and International Studies of Indonesia Dr.Jusuf Wanandi, President of China Public Diplomacy Association and Former Permanent Representative of China to the UN Office at Geneva and other International Organizations in Switzerland Amb. WU Hailong, Former President of Shanghai Institute for International Studies (SIIS), Chairman of SIIS Academic Affairs Council Dr. Yang Jiemian, Vice Dean and Professor of the School of International Studies of Peking University Dr. Zhang Haibin. They discussed on two topics: Reviewing China’s Journey back to the UN and Contribution to UN Causes and How Can China better Participate in Global Governance. About 150 participants, including representatives of United Nations agencies in China, diplomatic envoys in China, senior diplomats engaged in multilateral diplomacy, prominent experts and scholars from universities and research institutions at home and abroad joined the meeting. 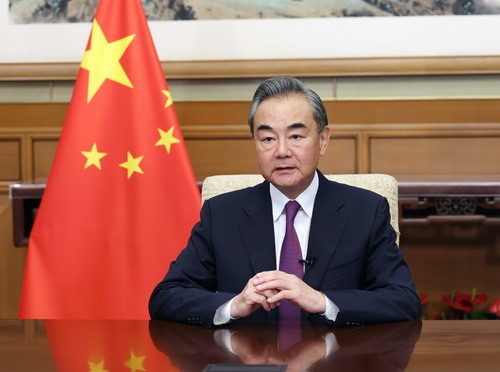 Wang Yi said, at its 26th Session in 1971, the UN General Assembly adopted Resolution 2758 with an overwhelming majority, restoring all the lawful rights to the People’s Republic of China in the United Nations. This was a landmark in history. It signified that the UN had truly become the most representative and authoritative inter-governmental organization. It also opened a new chapter in China’s cooperation with the UN. Over the past 50 years, China, with concrete actions, has lived up to the purposes and principles of the UN Charter, and has served as an important builder of world peace, the biggest contributor to global development, and a firm defender of international order. The world is at a new historical crossroads. Under the combined impacts of changes and a pandemic both unseen in a century, human development now faces multiple crises and the global governance system is undergoing profound adjustment. Now more than ever, the international community needs to come together to meet the challenges and promote common development. To this end, countries should build consensus and synergy in the following areas: First, upholding multilateralism to safeguard world peace and stability. Second, strengthening pandemic cooperation to jointly build a line of defense for life and health. Third, putting development first to promote common prosperity across the globe. Fourth, embracing openness and inclusiveness to develop an open world economy. Fifth, improving climate governance to build a clean and beautiful world. Sixth, enhancing exchanges and mutual learning to promote the progress of human civilization.

Wang Yi said, no matter how the international landscape evolves, China will resolutely safeguard UN’s core role in international affairs, stay firmly on the right side of history, strive to build a community with a shared future for mankind, join hands with all progressive forces in the world, and work tirelessly to advance the noble cause of peace and development for humanity.

Participants recalled the great significance of new China's return to the United Nations, the achievements and experiences of China's cooperation with the United Nations, elaborated on and analyzed the direction of multilateralism and global governance, and how China can further participate in global governance. They said, the restoration of PRC’s lawful seat in the United Nations established new China's international status, effectively improved China’s external environment, reversed the political ecology of the United Nations, greatly enhanced the representativeness and authority of the United Nations, and effectively promoted the democratization of international relations. It was a momentous event that changed the history of global cooperation, and an important milestone in the history of modern multilateral diplomacy. Over the past 50 years, China has borne the responsibility of a big country, unswervingly safeguarded the legitimate rights and interests of developing countries, resolutely upheld the purposes and principles of the UN Charter, taken concrete actions to maintain the international system with the United Nations at its core, actively participated in the work of the United Nations in all fields, and made unremitting efforts and outstanding contributions to safeguarding world peace and promoting common development.

Participants believed that COVID-19 is still spreading worldwide, world economic recovery faces uncertainty, the current global governance system has seriously lagged behind the changes in the international situation, and the deficit of governance is very prominent. The reform of the global governance system should be guided by the concept of fairness and justice, which aims at making it more balanced to reflect the wishes and interests of most countries. The United Nations should play a central role in this process, and promotes global governance reform through multilateralism. All UN member states should oppose harmful tendencies like unilateralism, containment and bloc politics, try to build bridges of cooperation and trust and refuse to build walls of indifference and suspicion. China puts forward the concept of building a community with a shared future for mankind, advocates the global governance concept of consultation, contribution and shared benefits, puts forward the Belt and Road Initiative, all of which are conducive to building consensus on multilateralism. Participants expressed the hope that China could continue to play an important role in the world economy and international politics, expand international cooperation, and make greater contributions to safeguarding world peace, promoting common development, pushing forward global climate governance and enhancing exchanges and mutual learning among civilizations.